House Bill 140 amends Title 75 (Vehicle Code), which had a restrictive 12-foot parking from the curb code in place. 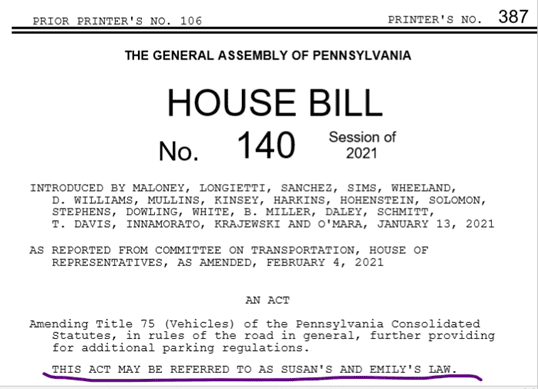 The amendment modifies the code to allow for pedestrian plazas and bike lanes to be installed within that once restrictive 12-foot curb code. Pittsburgh and Philadelphia advocates continue to work towards safe road infrastructure, to prevent and mitigate dangerous bike and car crashes.

The bill now bears the names of two young women who needlessly lost their lives while riding their bicycles.

In October 2015, Susan Hicks was struck from behind at the corner of Forbes and Bigelow in Pittsburg, PA. In November 2017, Emily Fredricks was riding her bike to work on Spruce Street when she was struck by a Sanitation truck.

For grieving families like the Hicks and Fredricks, this change to an arcane state vehicle code does little to ease the pain of their loss. However, their steadfast and fierce activism has created a legislative win that will improve road safety throughout the state.

Thank you to legislative leadership by Representative David Maloney (R-Berks) for introducing this bill and to Representative Sara Innamorato (D-Pittsburg) who led the effort to name the bill in honor of Susan and Emily. Please stay tuned as this law progresses to Governor Wolf.

If you or a loved one has been injured in a bicycle accident in Pennsylvania, contact our Philadelphia bike crash attorney at Piscitello Law today at (215) 372-8768 for a free consultation. Serving cyclists since 1991.